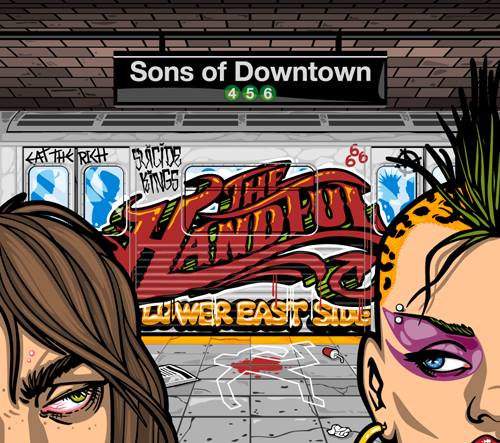 What the critics are saying...

"This new joint ("Sons of Downtown" ) is the hottest release they have delivered yet."
-KUDZOO Magazine Michael Buffalo Smith

"The Handful is an amazing Hard Rock band out of New York. These guys are well-established musicians that have each brought their craft together to create an incredible Rock Band. The thing that makes them so good is that they start with Hard Rock as a foundation, but then add elements of Punk, Metal, Prog, Classic Rock and Southern Rock to create an original sound in a rock world that is filled with unoriginality."
-Beowolf

"Each tune sucks you in like a good movie or a good book and leaves you in any mood the band wishes to put you in. The Handful remind me of some great story telling bands like Lynyrd Skynyrd, the Rolling Stones or The Who. Yes, this band is that good, period"
-Christopher J. Kelter, Rough Edge

"They still mix in the best sounds of the North, Central and South of the USA.
Excellent as ever.
Rating =10/10"
-Glenn Milligan, Metalliville

"Mark Duda is awesome, I love his voice—it reminds me of Buzz Osborne from Melvins and Ben Ward of Orange Goblin. His voice is undeniably manly but not in an annoying Viking Metal way. It sounds like he gargles gasoline, eats asphalt and washes it all down with nails. It’s just that awesome.
It’s always so great to review a good band from my native Jersey,
one of the most fun things I’ve heard in a while
In A Word: Swaggering. Grade=A"
—Dejon Turner, The Aquarian